The following is the first part of a three-part series on the roles of Christ as seen in the Septim Emperors from the Elder Scrolls universe. Part One can be found HERE, and Part Three will be linked once it comes out.

MAJOR SPOILERS for both Oblivion and the ESO main quest follow. You’ve been warned.

When trying to decide which of the Septim Emperors best personifies the Prophet aspect of Christ, I will admit that I struggled a bit. The obvious choice for the title is Varen Aquilarios from The Elder Scrolls Online, since he is literally called The Prophet. But, Varen isn’t a Septim. He’s not even Dragonborn, which is the whole reason why the events of ESO take place. So in spite of his humility, his reparations, and his familiarity with the Elder Scrolls, Varen was a no-go.

The other logical choice, then, is Martin’s father, Emperor Uriel Septim VII, whose prophetic qualities will be seen later in this article. But, first, we have to talk about his history in the Elder Scrolls Universe. 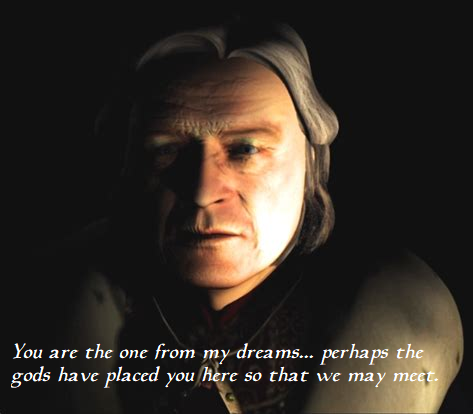 Uriel’s reign covers most of the games in the franchise. He is a catalyst for most of the major events, either directly or indirectly, that shape the player’s world. (The exceptions to this, of course, are Skyrim, since it takes place centuries later, and ESO, because he hadn’t been born yet.) We see this as early as the first game, Arena, where one of those dastardly Tharns kidnaps him and replaces him on the throne, to Daggerfall and Morrowind where the player character is sent by him to those locales on missions. Uriel isn’t just the Emperor. He’s the driving force of the games, their soul, in a sense.

It’s actually sad how little we actually get to know the man in Oblivion, my only in-game experience with him. He’s the first person the player character meets, sure, but they only spend a short time together before he is brutally murdered by the Mythic Dawn in front of the player. Even in his last moments, he is a catalyst. At his passing, the Dragonfires fail, since there is no longer a Septim on the throne. The Daedric incursion known as the Oblivion Crisis begins. And in the sacred city of Kvatch, a priest named Martin is about to discover his true purpose in life.

But this is not Martin’s story. It is the story of his father, the guiding hand of Imperial progress and unification, and the harbinger of Tamriel’s doom.

Uriel’s reign is divided into two main eras. When he was young, he was a warrior king, proud and ambitious, who sought to re-unify Tamriel as his ancestor Tiber Septim had done. He moved towards his goal with bold diplomatic actions, making significant strides in his conquest and creating economic prosperity throughout the Empire.

But change came swiftly as well, when the insidious Jagar Tharn cast the emperor into Oblivion and seized the throne (seriously, why did anyone still trust the Tharn family at this point? They’ve always been nothing but trouble). Uriel spent ten years trapped in literal Hell, tormented by waking nightmares and terrible visions. When he was finally rescued, he was forever changed by the experience.

The Uriel the player meets in Oblivion is an old man, whose later years have been spent moving pieces on the board in secret. His ambition never wavered, but he became much more secretive and hands-off in how he accomplished his goals. All the while, his terrible dreams continued. And finally, one day, they began to come true.

Uriel knows that the time he has is short when he hears that his sons have been murdered, so he flees the palace by way of a secret tunnel in the prison. This is where he meets the player character, and immediately recognizes them from his dreams. He knows the player’s great destiny, the important role they will play in the coming crisis. Because of this, he is able to entrust the Amulet of Kings – and with it, the last hope of Tamriel – to the player.

So, what can the life and death of Uriel teach us about Christ’s role as Prophet?

First, both Uriel and Christ are acutely aware of the way their journey ends. Both are doom-driven, spending their lives headed towards a cruel death at the hands of those who seek to destroy the great work set before them. But they do not flinch from their duty, from the call of the grave. Rather, they embrace the part they have to play in the story. This is because, in their role as Prophet, they know that this is a necessary step in the unfolding of destiny. While they can choose to change the course of events, they dare not, for it is their deaths which will bring about a necessary change, a defeat which will become a victory. 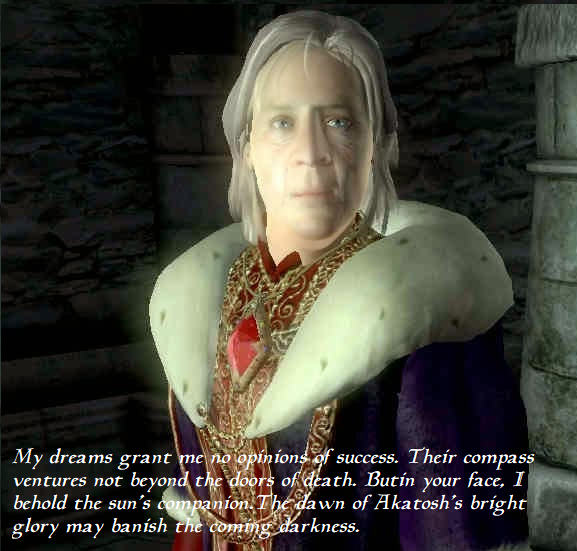 Second, both Uriel and Christ descend into Hell, of sorts, and return from this place of darkness victorious but changed by the experience. Uriel, being mortal, is weakened and made more cautious upon his return. The darkness he faces tears away some of who he was, lessening him.

Christ, on the other hand, returns from Hell in his full glory. The darkness is unable to corrupt and overcome his light, for he is God immortal. Rather, he is transformed into the victorious Lord, having conquered the forces of darkness once and for all. Uriel is not able to do this, and instead relies on the player character and his son to finish the job insomuch as it can be finished.

However, after their jaunt into darkness, both Uriel and Christ begin to operate differently than they did before. Uriel rules his empire secretively, relying on his servants, the Blades, to carry out his missions. Christ also relies on the apostles to do his work, appearing to them and giving them the tools they need to bring all the earth under his rule. No longer is he teaching and preaching publicly. Instead, he appears in secret to his followers, even when those appearances are in public places, such as on the beach or on the road to Emmaus. He keeps himself shrouded, only revealing his true self to his followers through the food he offers them.

This secretive behavior does not make either less of a ruler. Instead, in both cases, it creates a sense of the hidden, the mystical, which is of course the domain of the Prophet. The Prophet does not speak of things that are visible to all. It is his job to pierce the veil, to look beyond, and to share this mystical communion with those he serves. The Prophet is the mouthpiece of God, but he is also the messenger of hidden truths. It is in his nature to be shrouded, as his domain is the bridge between the visible and invisible, between the knowable and the unknowable, between reason and faith.

And here is the lesson we can take from Uriel Septim VII: we must not fear that which exceeds our understanding. We must trust in the promises we have been given that the story of our lives will not end in tragedy, but that a greater good is at work which will make all things new.

One thought on “Christ in Three Septims: Uriel Septim VII, the Prophet”